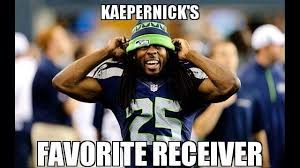 Hall of fame quarterback Joe Montana was asked Tuesday whether he thought former San Francisco 49ers quarterback Colin Kaepernick would land on an NFL roster by the time the 2017 season starts. In giving his answer, Montana brought up another former NFL quarterback, Tim Tebow.   Translation: Kaepernick’s NFL future might not be too bright, as far as Montana is concerned. “I’m not sure. I think there’s an injury somewhere he probably gets in,” the 49ers legend told the Sporting News of Kaepernick. “In most cases, you look at Tim Tebow — a great guy and everybody was talking about him. But what it comes down to is 40% completion or even in the low 50s — you can’t win in the league with that. You won’t be in the league very long. It comes down to his play as much as anything.”   Tebow was 8-6 as a starting quarterback in the NFL but completed only 47.9% of his passes. He hasn’t played in the NFL since 2012. Kaepernick is 28-30 and has completed 59.8% of his passes — not a great completion percentage, but significantly higher than Tebow’s. Still, Kaepernick hasn’t been able to land a job since opting out of his contract with the 49ers in March. One thing Kaepernick and Tebow have in common is that they’ve both been labeled with the D-word: “distraction.” The highly religious Tebow created a media and fan frenzy everywhere he went. Kaepernick caused a stir last season by refusing to stand for the national anthem before games as a social protest. Montana acknowledged that Kaepernick’s role as an activist might not be doing him any favors during his job search. “One of the things you don’t look for is distractions in the locker room,” Montana said. “You can go back to [former 49ers coach] Bill Walsh, and as soon as there were guys that weren’t fitting in what he was looking for, it didn’t matter how good you were. You weren’t on the team for very long. You have to have people who want the same thing, fighting for the same thing and willing to put in the time.”

I know Kapernicks politics have something to do with him not having a job yet. But there are plenty of qb needy teams out there. The fact that the Jets haven’t signed him speaks volumes.
Could it be so simple as Kapernick sucks?